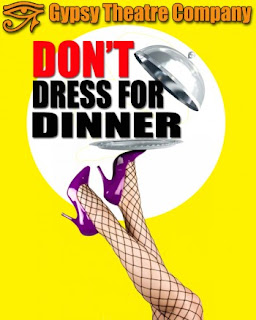 Gypsy Theatre Company pleases again, with the wildly funny high quality reproduction of the wildly funny Tony award winning, “sort of sequel” to the Broadway’s smash -hit Boeing-Boeing at the Buford Community Center.
Opening night, August 25th we enter the Sylvia Beard Theatre, to be greeted by an open stage and lovely set, both rustic and elegant as a renovated French farm house with a prominent and unusually long couch from  1971. There was no change of set during the show as it was performed in the main living room of the country house somewhere outside of Paris,  The design was meticulous in every detail down to the rustic sliding barn door to the piggery and cow shed as married couple; Bernard played by Davin Allen Grindstaff and his wife Jacqueline played by Julie Trammel, affectionately named the 2 guest rooms on each side of the stage complete with, appropriately labeled cow and pig wooden cut outs which I might add, become quite helpful to aid the audience in keeping the revolving bed room assignments straight as the play’s complex relationship statuses continue to change which both confuses and delights the audience.
Our story begins with Bernard,  who hopes to send his wife, Jacqueline, to her mother’s for the weekend, so that he can be alone with his mistress, Suzanne, a Parisian model, played by Alessandra Scarcia.  Bernard has hired a Cordon Bleu cook, Suzette, played by Rachael Endrizzi and  invited his friend Robert played by Aaron Gotlieb to dinner to be his alibi .
Jacqueline cancels her plans to be with “her” Robert after she learns Robert is also spending the weekend. This causes Bernard to panic, and he tells Robert of his affair with Suzanne. who is to arrive at any moment. Bernard begs Robert ,against his will to pretend that “Suzy” is his girlfriend.
Bernard and Jacqueline leave to buy groceries, Suzy arrives — but it’s the caterer, not the mistress un-beknownst to Robert who then introduces Suzette as his girlfriend upon the couples return. Bernard is furious because of the mix-up, and Jacqueline feels betrayed thinking she was Robert’s only mistress.
Suzanne with a very authentic French accent finally arrives, learns she must now play cook is outraged but, reluctantly agrees to play her part.  All in the first 15 minutes of the show.
The lies continue to grow, Suzette the cook, with the  brash and truly entertaining cockney accent , is the winner of the cast as she cashes in by being coaxed repeatedly  to pretend to be different players in the twisted schemes of deceit, orchestrated by the cheating lovers to keep their lies intact and everyone’s temper at bay.  The cast did an amazing and professional job but,  Robert and Suzette won my heart with their animated expressions and difficult tongue twisting monologues. Don’t dress for dinner was a truly hilarious lesson of what a tangled web we weave when first we practice to deceive. If you haven’t gotten tickets yet you still have time what are you waiting for,  It plays though September 11th, 2016.