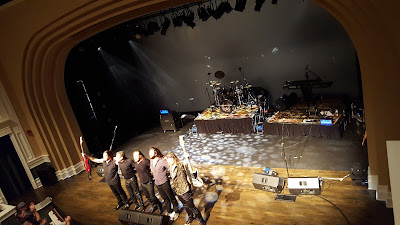 Departure, the Journey Tribute Band, returned to the stage for the 3rd time and magically sent its audience well those over say 40+ back to the late 70s early 80’s for the 3rd time at The Buford Community Center,  Friday August 27th, 2016.  Although, there were a few millennial and younger who danced and swayed in the theatre, a majority of the audience knew every word to every song.
I realize that because I am true Journey fan my review could be somewhat subjective. Journey was, in fact my favorite band in high school. I played their albums over and over again, turned the radio up when their tunes come on and am not ashamed to admit, have the Escape CD in my car and still play it regularly.  I will for the sake of professional journalism remain objective, yet will also say  I set my Journey tribute band standards particularly high.
It would be an understatement to simply say Departure was not a disappointment, with eyes closed  you weren’t simply transported, Departure is  the musical essence of Journey.  I wasn’t the only one transported back.  The audience participation was complete with cell phone flash lights that apparently touched the members of the band who recorded us waving to “O Sherry with lights out and cell phone flashlights on. A far cry from our lighter from the 80’s but still honored the joy the band gave to us.
The band who have been perfecting their craft for the last 9 years together, took the stage and the Journey transformation was almost immediate, not attempting to be Journey look a likes the band definitely took on the look and feel of rock bands from the era. Lead vocalist Bryan Williams  with waist length long hair sporting white tails with his jeans and black T-Shirt.  Keyboard player Joel’s long 80’s rock band esque wavy tresses began blowing wildly from a fan under his keyboard as he stepped onto his pedestal creating a true rock band feel started the show with; Anyway You Want It, other songs included; Be Alright Without You, Steve Perry’s Foolish Heart, Wheel in the Sky with keyboard player Joel taking over the leads on  guitar. 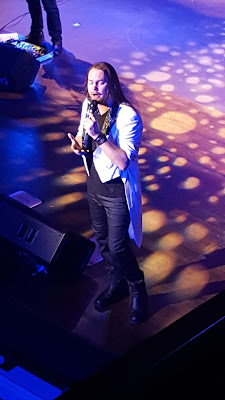 Lead Vocalist Bryan Williams has true stage charisma. Engaging regularly with the audience stepping across the side boxes like steps tapping heads and twirling the ladies in the audience on the first row.  The entire band was entertaining to watch and although unique were the essence of Journey and many rock bands of the era.
Williams , lead the  ladies in a friendly woo hoo contest, against the upper balcony and ground floor as the band honored the ladies with their rendition of  Girls Can’t Help It.  By the time, they announced their last song the audience of course true children of the 70’s and 80’s, whistled and cheered until Departure returned to the stage with our favorite Journey encore songs including Open Arms, Stone in Love, Faithfully and finally ending with Separate Ways.  We know this 3rd performance in Buford won’t be their last.  Get your tickets early when they do because they always sell out quickly.